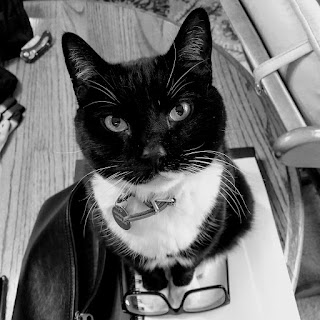 Hi Everyone: By 10 a.m. MST today, 1/11/21, my family and I will have said our last goodbyes and given our last loves and pets to our 17 year-old tuxedo cat, Manny. Renal failure and a heart issue began cascading into other things like mouth sores and pulmonary issues, and they all landed forcefully on him this past week. I’m writing this a day ahead as events have happened so fast, I have to do lucid things while I am lucid and in between the frequent and unpredictable sob fests I’ve been having since getting the heartbreaking news from the vet. I love this Manny-cat with all my heart, and I am completely shattered. And I apologize zero for being that emo dude in this lifetime, especially when it comes to our four-legged kids. My ex-wife Robin and I first got Manny in April of 2006 from Foothills Animal Shelter (and I’ll be taking him there this morning, 1/11/21, for his last time with me here in this life). When we got him, or I should say when he snagged us, we had been living in th
1 comment
Read more

My Source of Dread: Why I Read and Write Horror 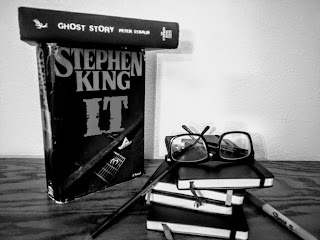 I was five years old and playing in the dirt side yard in front of my childhood home when I met my first clown. I distinctly remember one summer day when a man dressed as a clown and carrying balloons (the colors black and yellow seem prominent in my memory) walked by my house and tried to sell me one of the balloons. I don't remember how much they were exactly, but it didn't matter. I had no change on me. When I told him I had no money, he seemed irritated and raised a hand like he was going to hit me, and skulked away. The whole time he was yelling back at me, “they’re only pennies , kid… they’re only pennies and you can’t even buy ONE? ONE!? ONLY PENNIES!! ” This frightened me in an indescribable way. For weeks I was scared he would come back and kill me because I didn’t buy a balloon. Or worse, he would just stand outside my window. *** “Why do you read and write horror?” Although some horror writers—that is, those who have the guts to actually use the w
Post a Comment
Read more

Dear Diary/Blog/Journal Site: Is this thing on?

- May 19, 2018
(taps microphone) The forward/right arrow on my keyboard is slightly sticking, and it's driving me crazy. The last time I tried to clean a keyboard I killed it (using foaming glass cleaner spray might have had something to do with it) so I'm a little gun-shy on getting aggressive with it. I share this situation with you so that you understand that this annoyance isn't preventing me from what I've needed to do for a long time: write about my writing, and write about reading and writing in general. Yes, it's practice. It's decompression. It's cathartic. Writing is -to resort to contemporary vernacular- "all of the things". Coffee is "all of the things" too, but I have to exercise caution in combining it with writing as the close proximity can create issues. And add one more excuse for not writing. I've been bedeviled by not-writing for over half a decade (more on that later.. but maybe less would be better). Personal issues, and non
Post a Comment
Read more

Jeamus Wilkes
Welcome to me. What's important is that I love to read and write. And to do what I love to do, you have to do a lot of both. I've been published a few times (mostly articles, academic papers, and short fiction) and would like to do a lot more of that. I'm owned by three dogs, three cats, and five fish.